Fondriest  is the “racing” brand which joined the group in 2006 and which contributed  to the sharp change in the company mentality taking place in Cicli Esperia.

As a matter of fact, we are facing an important increase in the strategic sensibility linked to production and marketing of high- range bicycles. This allowed the company to concentrate a part of its resources in the development of

high-performance bicycles and frames, dedicated to the most demanding 2-wheel professionals and enthusiasts. 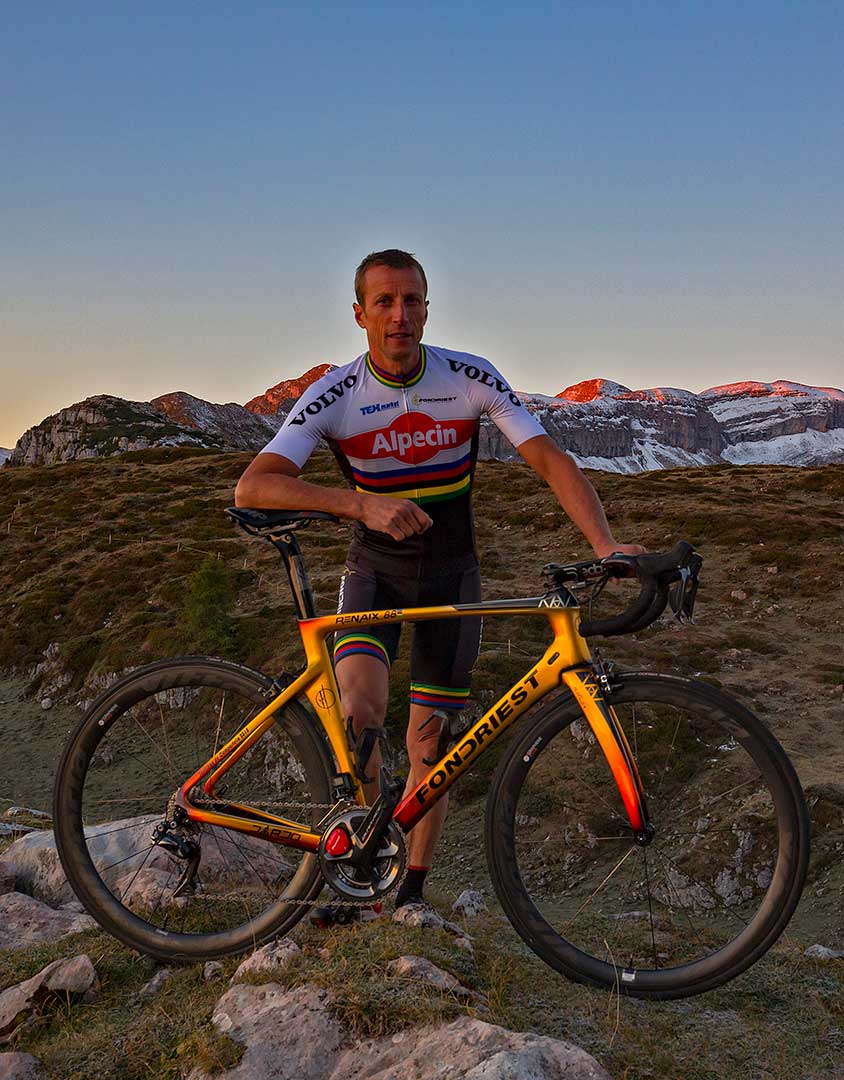 Maurizio Fondriest was born in Cles (Trento) in the heart of the Val di Non on 15 January 1965. During his 12 seasons as a professional cyclist, he added a good 69 victories to his list of successes on the road. The winner of the World Championships at the young age of 23, he won the world cycling cup in ‘91 and ’93, the mythical Milano-San Remo in 1993, and collected countless successes during his career both in traditional championships as well as stages in the Giro d’Italia and the Tour de France.

Today, as in the past, he continues to be a great fan of this sport. Careful and meticulous about the technical aspect of bicycles, his focus on the seated position -in search of the “perfect” geometry – is a legend.

After dedicating a professional career to sport, he put his family first, but the life of a great champion needs to carry on into the future and this is why Maurizio now transfers all his advice and experience to numerous up-and-coming young cyclists through his extraordinary example.

Ever since he started putting his name on the first frames, he realized that every single detail of the bicycle would have to reflect his personality and professionalism. Over the past years, he has registered several patents because he has always believed in R&D, and every new idea that comes to life is a new challenge.

THE MOST IMPORTANT STAGES 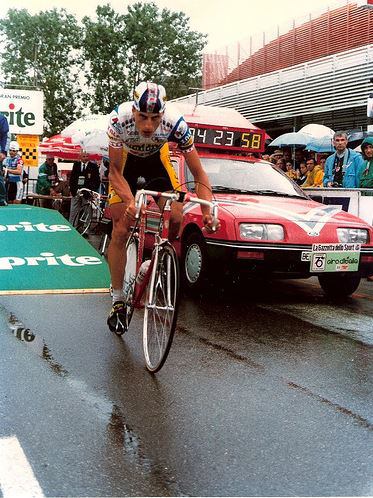 THE DEBUT IN THE WORLD OF THE BIG

Maurizio Fondriest obtained a lot of victories among Under 23 and in 1986 he won “Giro Delle Regioni”. One year later, in 1987, he became Pro. His first team was Ecoflam (Team Manager Giuseppe Martinelli). 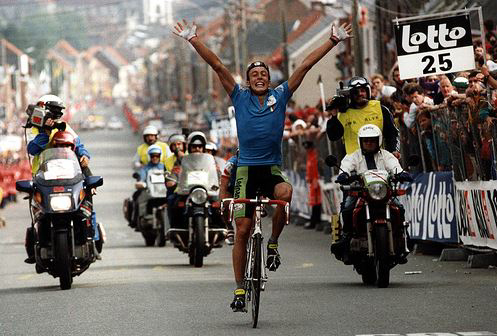 In 1988, gold year, Maurizio Fondriest won the Road World Championship, in Renaix, Belgium. When he was 23 years old, won a Tirreno-Adriatico’s stage and he ranked 2nd in Milano-Sanremo. 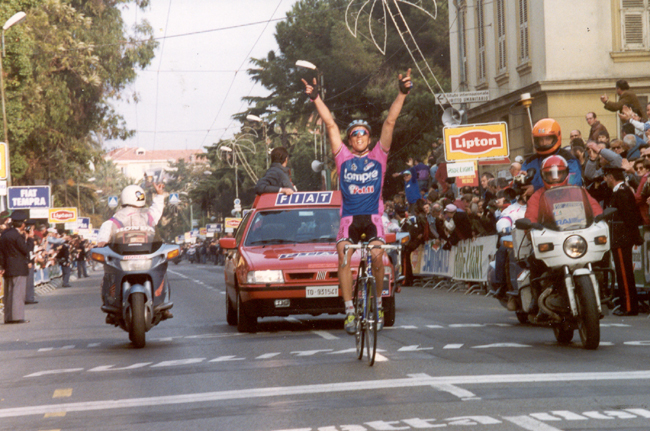 THE YEAR OF RECORDS 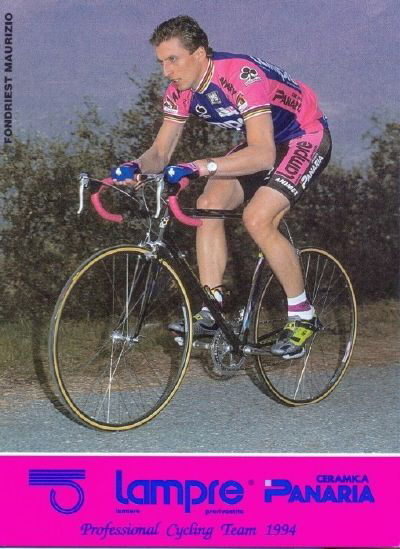 Maurizio Fondriest in 1994 wore Team Lampre’s jersey and he had been again protagonist also in that season. He won Tour of Britain, 2 stages and overall standing in Giro di Polonia, Coppa Sabatini and Giro del Lazio, too. 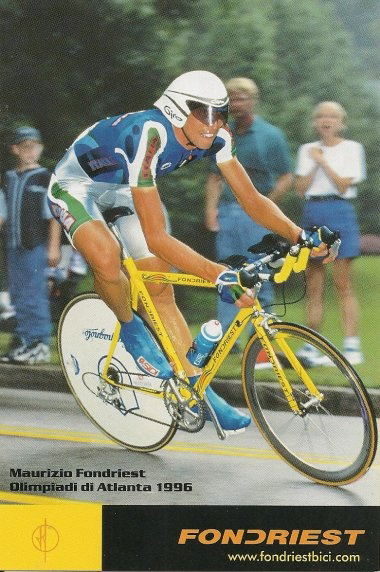 After 11 years of career, with 9 presence in World Championships, 4 Giro d’Italia, 4 Tour de France, 2 Vuelta a España , 36 presences in the “Classiche Monumento” and 69 victories, Maurizio Fondriest retired after his last season with Team Cofidis. 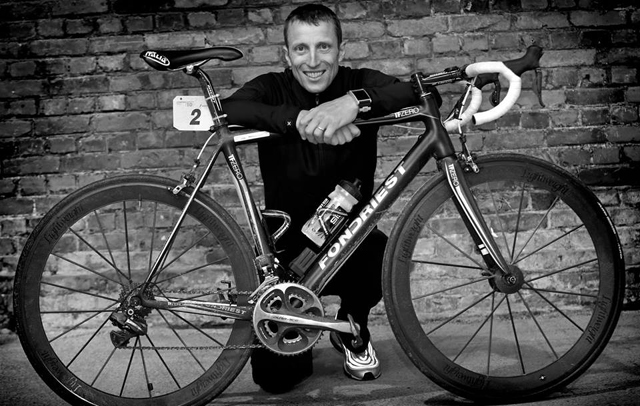 After leaving the cycling career, Maurizio Fondriest put all his attention to building bicycles. He created the company Fondriest Bici. In 2006 the company was acquired by the group Cicli Esperia.

DISCOVER OUR BICYCLES AND OTHER
PRODUCTS FOR ATHLETES LIKE YOU

We use cookies on our website to give you the most relevant experience by remembering your preferences and repeat visits. By clicking “Accept All”, you consent to the use of ALL the cookies. However, you may visit "Cookie Settings" to provide a controlled consent. Read More
Cookie SettingsReject AllAccept All
Manage consent

This website uses cookies to improve your experience while you navigate through the website. Out of these, the cookies that are categorized as necessary are stored on your browser as they are essential for the working of basic functionalities of the website. We also use third-party cookies that help us analyze and understand how you use this website. These cookies will be stored in your browser only with your consent. You also have the option to opt-out of these cookies. But opting out of some of these cookies may affect your browsing experience.
Analytics
Analytical cookies are used to understand how visitors interact with the website. These cookies help provide information on metrics the number of visitors, bounce rate, traffic source, etc.
Advertisement
Advertisement cookies are used to provide visitors with relevant ads and marketing campaigns. These cookies track visitors across websites and collect information to provide customized ads.
Necessary
Necessary cookies are absolutely essential for the website to function properly. These cookies ensure basic functionalities and security features of the website, anonymously.
SAVE & ACCEPT
Powered by